District of Colombia or commonly referred to as Washington, DC is the capital of the United States. It is bordered by the states of Virginia to the southwest and Maryland to the northeast. So when Michael and I went to visit his State College friends, who now work in DC, we had to go to Virginia for Dave (who was gracious enough to let us stay in a house that he shares with 3 other guys) and to Maryland for the rest of the gang.

Michael’s friend, Michael Austin, picked us up from West Chester,Philadelphia and drove* us to Rehoboth Beach, Delaware (of which we stayed for 2 nights and will blog about it on another day) and to Washington, DC. *Time specifics to follow on another blog.

Dave picked us up at Target Mall, somewhere in Virgina (pardon my lack of specifics of the geographic location as things just happened too fast). And when we got to their place at Seven Oaks, he told us to suit up for the Chick-fil-A free meal.

Background: Chick-fil-A is a fast food chain in the US that specializes in chicken entrées. And on this special day, anyone can get a free meal in any Chick-fil-A branch if you can dress up like the Chick-fil-A mascot. 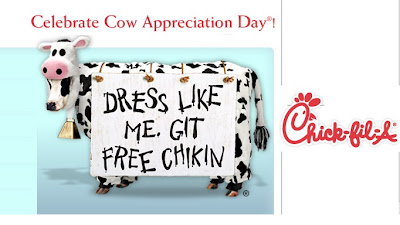 Dave managed to print us out some Chick-fil-A cut-outs and it was then to each to his own imagination on how to make the costume. We somehow just all ended up following his suggestion though, that is to get a white T-shirt and cover it up with black patches here and there, stick a tail and a pair of hoofs somewhere and voila! 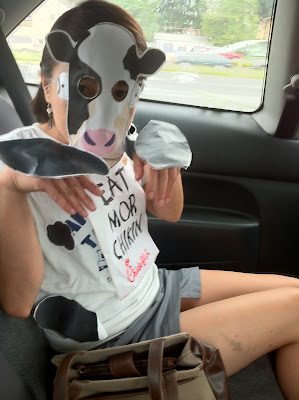 *If you notice the bruise on my right leg, that was courtesy of Connor’s very excited dog. Connor is a friend from Sayre, PA. I will discuss more details on the cast of characters of my US of A adventures but of course, I will leave their real identities a mystery, well maybe except for some. 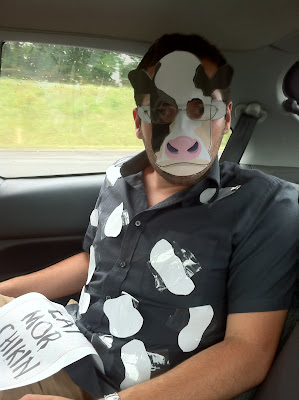 Or the other way around, black cow with white spots.

And off we went to Chick-fil-A, pretty confident with what we have accomplished and excited to get our free meals. But when we got there, everyone else seemed to be more resourceful.

This picture is actually taken from Chick-fil-A’s website but pretty much this is close to reality.

Well, we still got our free chicken meal. In fact, Dave got a second serving just for principle. 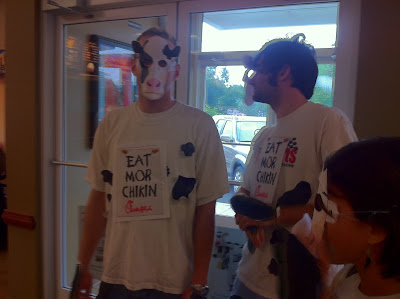